Future for children
​There are billions of you and you are all smart enough to know that in order to maintain growth in the development of the free market economy billions of consumers should continue to consume more of the limited resources of this planet with all industrial might.

You know that it is not possible to continuously consume more of limited resources because your own funds run out because they are limited.  This happens also with Nature's resources; they are being depleted and run out as evidenced by the Earth Overshoot Day happening steadily earlier in the year.

Nevertheless, the persons responsible for keeping the free market economy going still pursue growth in its development.  Listen to them.

As a consequence the ecological problems increase in number and become worse.

At the same time the persons responsible for the development of the economy committed themselves, before you were born, to achieve the Millennium goals.  They did not achieve any of them.  One of the goals was: Eradicate extreme poverty and hunger by the year 2000!  You know better.  Another goal was: Ensure environmental sustainability.  All the ecological problems that cause more and more damage to the environment clearly show that this goal has not been achieved at all.

So, the Millennium goals were expanded to the Sustainable Development Goals.   They cannot be met as long as the macro-economic practise is: maintain growth in development.  To the contrary, the ecological problems will become worse and will worsen faster and faster.

When the Millennium goals were established it took some years before it became clear that all the measures taken did not have the desired effect.  After the climate conference in Paris, in 2015, criticism and proofs of the inefficiency of the means taken, appeared soon after the conference.  The climate conference in Katowice, Poland in December 2018 was considered to be a success because it came up with the Katowice Rulebook.  It took just a few days before two girls from a high school in Belgium decided to organise a demonstration by children for better measures to control the climate.  They hoped to get at least 20 participants.  On January 10, 2019, 3000 children had skipped class and marched through Brussels.*  The number of admirably well-made boards with very clear messages was unaccountable.  The hashtag #youthforclimate remains.  Since then, tens of thousands of you have marched in cities all over the planet in favour of better climate actions.

There must be millions of you studying in a chemistry course the law of ‘t Hoff-Le Chatelier; dynamic processes of which the equilibrium is disturbed react in a way to re-establish the equilibrium.  When you apply this law on the macroscopic scale of the processes of Nature, this law seems to be valid as well.  Nature is a large collection of dynamic processes of which the equilibria have been perturbed since the industrial revolution began.  Biodiversity, e.g., has been destroyed in large areas.  Biodiversity is necessary to keep stability between multitudes of flora and fauna.  Nature is re-establishing the balance by wiping out the disturbing element: human beings.  The amount of volcanoes that erupt increases as well as the number of eruptions per volcano.  There are more earthquakes, tsunamis, hurricanes, storms, floods, fires and snow.

"Often referred to as the Earth’s “Third Pole,” the Himalayas hold approximately 600 billion tons of ice, making them the third largest deposit of ice and snow in the world. Rapid melting could have devastating reverberations from origins in China to downstream communities from India, Pakistan and Bangladesh to Vietnam, Laos and Cambodia, some of which will face the double challenge of flooding in the near-term and water scarcity in the decades to come."  The Hill, "Melting glaciers could destabilize Asia", paragraph 2
https://thehill.com/opinion/energy-environment/452891-melting-glaciers-could-destabilize-asia?

"Swarms of locusts continued to wreak havoc in east Africa, destroying crops and posing an unprecedented threat to food security in the region as ten countries have so far been affected.
The UN's Food and Agriculture Organisation (FAO) said on Tuesday that the situation is "extremely alarming in the Horn of Africa, specifically Kenya, Ethiopia and Somalia where widespread breeding is in progress and new swarms are starting to form".  The agency had previously described it as the "worst desert locust crisis in over 25 years, and the most serious in 70 years for Kenya."  Euronews, Friday March 20, 2020

​In the article in The Guardian, International edition of March 18, 2020, "'Tip of the iceberg': is our destruction of nature responsible for Covid-19?" https://www.theguardian.com/environment/2020/mar/18/tip-of-the-iceberg-is-our-destruction-of-nature-responsible-for-covid-19-aoe
it is written: "But a number of researchers today think that it is actually humanity’s destruction of biodiversity that creates the conditions for new viruses and diseases such as Covid-19”

A judge in Belgium condemned a person who initiated a lawsuit against a co-proprietor who had removed the biodiverse plantation on a part of the grounds owned by all proprietors, covered the area with stones and placed a black metal fence around it.  The judge condemned the demanding party to pay a maximum amount.  One of the arguments the judge presented in his verdict was, it (the area covered by stones and surrounded by a black metal fence) looked neat.

He passed the sentence on April 16, 2020, when the number of contaminations with Covid-19 had reached a zenith in Belgium.  Shortly after the sentence a neighbour also placed a metal fence around a part of the commonly owned grounds.  There is no more biodiverse plantation there either.

In Wuhan, China, it was the police who silenced the doctor who rang the alarm bell about the corona virus.  In Belgium it was a judge who condemned a person for initiating a process about destroying biodiversity.  The police in China was ordered to do so.  The judge in Belgium passed the judgement on his own initiative.  The doctor in Wuhan died before the hundreds of thousands of persons died because of the corona virus.  The person who complained about destroying bio-diversity will most likely also be dead before the hundreds of thousands of persons die as a result of destroying biodiversity in nature.

​Before the Corona virus outbreak, the death toll due to natural catastrophes ran just in the hundreds.  On March 20, 2020 there were just a few more than ten thousand who died because of the Corona virus.

​Eventually millions of persons will die in natural catastrophes.  You, who are now children, will be among these millions if maintaining growth in the development of the economy continues to be pursued.

You do not have the slightest chance of getting the age of your parents or grand parents as long as consuming more is the goal with which billions of consumers spend their money.

To prevent such a future, you could register to shop in the Ethical market Economy, EmE  but you are not yet 18 so you need permission of your parents to do so.  If they would give it you can spend your money in this economy with as goal to live with products with an ever-higher ecological content.  You can ask your parents, your entire family to register as well.  If there are enough of you who do their shopping in the EmE you could successfully aim at safeguarding the integrity of Nature for your and following generations.  Then you can all age gracefully.

If you are allowed to register then do indicate your age and year of birth.  Everybody will then notice that children do not shut up, that you are aware that a group of heads of state can never control the climate of a planet, cannot solve its ecological problems.  -  Every time a head of state or VIP declares after a climate conference that he and his colleagues are going to control the climate, this person reminds me of the King of the planet which le Petit Prince of Antoine de Saint Exupéry visited.  The King declared that he decides when the sun comes up and when it goes down.  Le Petit Prince asked the King to let the sun come up.  No declared the King I will do so only when the sun is supposed to come up.  -
Only consumers can leave the climate undisturbed and solve ecological problems because they can adopt ways of living that keep Nature in perfect condition, as you will be doing by making your purchases in the EmE.

I would thoroughly enjoy meeting you there.

​In the mean time I advice you, nay urge you to study this whole site to verify whether the arguments presented are scientifically sound.  You are intelligent enough to validate the concepts on which I base the EmE.  Trust me only when you are convinced.

If you are convinced, there is a possibility to register as a consumer or producer on the "biosustainable" market at Invitation.​ 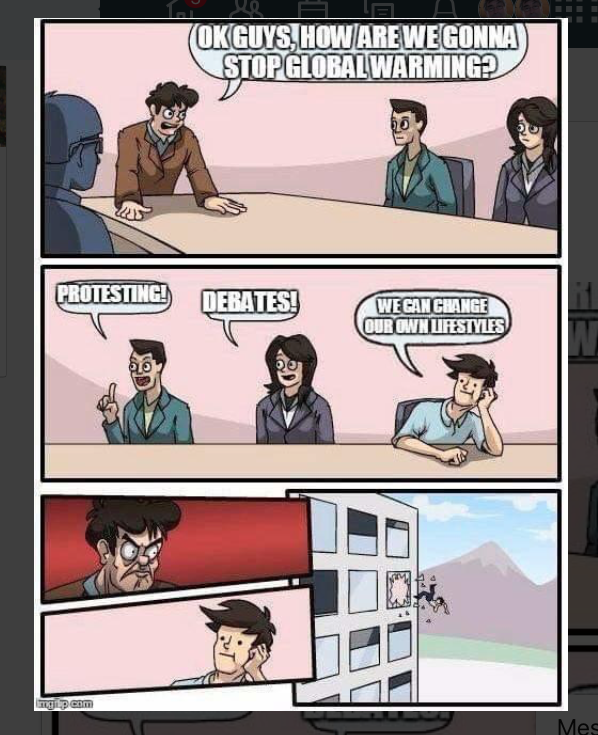